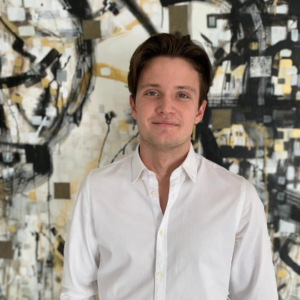 What does Judaism contribute to your life, and what steps have you taken to engage with the Jewish community?

I grew up in Durban, a coastal city in South Africa with a small yet mighty Jewish population. For me, Judaism served as a moral compass and created a sense of belonging. I highly value this community and have taken great steps to engage with my Judaism – going to university in Israel and, most recently, beginning my Aliyah process.

Another step I have made to support the Jewish community is taking the Jewish Future Pledge. I heard about the Pledge from a Facebook post one of my friends reshared. The mission immediately resonated with me – as a young Jew, I have noticed many of my friends drifting from religion. I knew this commitment would be a tangible way to protect and instill the importance of Jewish longevity in the next generation.

What conversations have come up with friends or family since taking the Pledge?

After taking the Pledge, I shared the concept with my grandparents. At first, they were hesitant and told me they don’t have much to donate. I continued, explaining Pledge isn’t only for people with large sums to give away but for everyone who supports the Jewish community and wants to secure a Jewish future.

My grandparents quickly bought into the idea and became the second people in South Africa to take the Pledge – directly after me! My grandparents not only took the Pledge but are also planning to speak to their lawyers about actualizing their Pledge.

I am proud to have inspired my family members to take the Pledge and will continue to share the initiative with my friends and family.

Why is it important to support Jewish institutions?

The Jewish future isn’t secure; people are becoming more secular and disconnected from Israel. In my opinion, we, as Jews, are responsible for reviving our community.

I grew up in a secular household without any Jewish education. As I got older, I began researching Israel, the conflict, and Zionism and developed a deep appreciation for our religion and culture. I wish I had the opportunity to learn about this at school, but unfortunately, the Durban Jewish community is too small to have any populous Jewish day schools.

To afford university in Israel, I obtained a scholarship from Telfed, a South African Jewish institution. Experiencing the culture of Israel and learning more about my background was a pivotal time in my life – one that wouldn’t have been made possible without the scholarship. Supporting organizations like these give opportunities to people like me, who were able to connect with their heritage later in life.


To provide you with a great user experience, this site uses cookies. By using jewishfuturepledge.org, you accept our privacy policy.
California residents may opt-out here.
Manage consent

This website uses cookies to improve your experience while you navigate through the website. Out of these cookies, the cookies that are categorized as necessary are stored on your browser as they are essential for the working of basic functionalities of the website. We also use third-party cookies that help us analyze and understand how you use this website. These cookies will be stored in your browser only with your consent. You also have the option to opt-out of these cookies. But opting out of some of these cookies may have an effect on your browsing experience.
Necessary Always Enabled
Necessary cookies are absolutely essential for the website to function properly. This category only includes cookies that ensures basic functionalities and security features of the website. These cookies do not store any personal information.
Non Necessary
Any cookies that may not be particularly necessary for the website to function and is used specifically to collect user personal data via analytics, ads, other embedded contents are termed as non-necessary cookies. It is mandatory to procure user consent prior to running these cookies on your website.
Save & Accept