A native Ukrainian, I initially feared my country might disappear and that like my Jewish ancestors, my identity could be thrown into question. I saw articles about Holocaust survivors not making it through this new war. Raising awareness and supporting crisis funds is critical, but I knew I had to do more. Through a volunteer mission coordinated by the Jewish Federations of North America (JFNA), partnering with The Jewish Agency For Israel (JAFI) and the Joint Distribution Committee (JDC), I went on volunteering to the border of Ukraine in Poland. I wanted to support Ukrainians in peril as they crossed the border out of Ukraine and into the unknown.

In the toughest moments of people’s lives, though, I saw hope. These Jewish Ukrainian refugees immediately went to the Israeli flags at the Polish border, saw the Star of David, and knew then and there they still had a place to call home. 80 years ago we did not have a land that could save us, but I wanted to make sure first-hand that the Jewish community came together to support our brothers and sisters in Ukraine.

Knowing you have a home, no matter how far the physical distance, can provide light in the darkest moments. Wearing a bulletproof vest and missiles flying over my head, my main thought was “This is where I belong, here with my people. I am walking the walk, and fulfilling the values of Tikkun Olam.”

Why is it important to sign the Jewish Future Pledge?

When I first learned of the pledge, it was an “aha” moment. The pledge gives us a written commitment, a commitment that is visible. It leads us to a place where all we need to do next is pull up our sleeves and do the work. There’s a lot of work ahead of us and we’re never going to stop, and the pledge gives us a necessary foundation.

Why is it so important to ensure a Jewish Future?

I don’t want the history to repeat itself.

Too many people live in their own bubble, not believing antisemitism and hate still exists. Too many don’t recognize antisemitic comments, while others won’t call it out.

I want to push for people to not be afraid to be Jewish. Once we’re afraid to express our Jewish identity, we’re lost. I don’t want anyone to be afraid to go synagogue, services, the JCC, or anywhere else where Jews are welcome. I want to educate people on the topic, so they too can know the importance of celebrating and not backing down from your Jewish identity.

What was it like for your father and grandfather to make Aliyah after hiding their faith out of necessity in Soviet-era Ukraine?

When our family arrived in Israel, it was the first time in their lives that my father and grandfather felt safe saying directly they were Jewish. My grandfather felt comfortable practicing his Jewish values and going to synagogue.

My non-Jewish mother’s friends questioned her being in a relationship with a Jewish man. Many take it for granted today, but making Aliyah allowed them both to finally feel free. 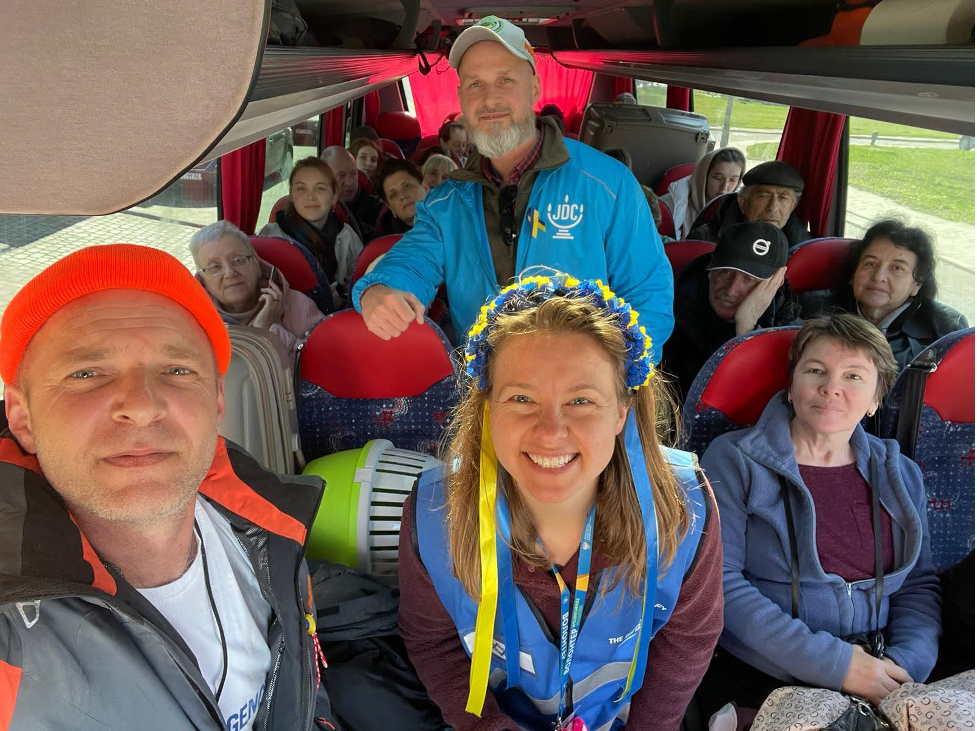 Ana Sazonov is the Executive Director of the Columbia Jewish Federation in South Carolina. A proud Ukrainian born to a non-Jewish mother and father who repressed his Jewish identity, her family made Aliyah to Israel following the collapse of the Soviet Union through the Jewish Agency For Israel and the Law of Return.

Ana served two years in the Israel Defense Forces (IDF) as a Basic Training Commander and trained IDF soldiers to be combat-ready. During her service, she joined ‘Nativ,’ an IDF and JAFI program for strengthening Jewish and Israeli identity. This program helped her to uncover her Jewish identity and connection to Israel, to gain a sense of belonging, and to formally join the Jewish people through conversion.

She found her passion in Jewish communal work, beginning as the Israel Fellow to Emory University Hillel in Atlanta, where she helped students explore their Jewish identity and connection to Israel. Ana received an MBA and MA in Jewish Professional Leadership from Brandeis University.


To provide you with a great user experience, this site uses cookies. By using jewishfuturepledge.org, you accept our privacy policy.
California residents may opt-out here.
Manage consent

This website uses cookies to improve your experience while you navigate through the website. Out of these cookies, the cookies that are categorized as necessary are stored on your browser as they are essential for the working of basic functionalities of the website. We also use third-party cookies that help us analyze and understand how you use this website. These cookies will be stored in your browser only with your consent. You also have the option to opt-out of these cookies. But opting out of some of these cookies may have an effect on your browsing experience.
Necessary Always Enabled
Necessary cookies are absolutely essential for the website to function properly. This category only includes cookies that ensures basic functionalities and security features of the website. These cookies do not store any personal information.
Non Necessary
Any cookies that may not be particularly necessary for the website to function and is used specifically to collect user personal data via analytics, ads, other embedded contents are termed as non-necessary cookies. It is mandatory to procure user consent prior to running these cookies on your website.
Save & Accept